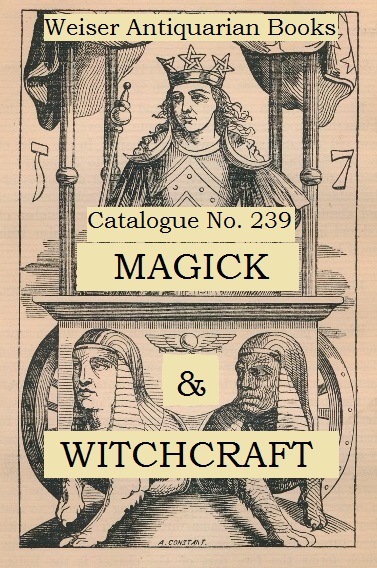 York Beach, Maine, USA: Teitan Press, 2011. First Edition. Hardcover. Octavo. xviii + 78pp (vi). Bound in high quality black cloth, with a gilt design stamped on the front cover, blind rules, and gilt title etc. on the spine. Black "coffin silk" endpapers. Edition limited to 800 numbered copies. Printed in red and black on acid free paper, sewn. "A Book of the Offices of Spirits" is the first ever publication of this Solomonic text or grimoire which, in common with the better-known "Goetia," is essentially a catalog of demons, giving their name, description, rank in the infernal hieararchy, number of attendant legions, offices (abilities), as well as a variety of magical rituals for their conjuration and other purposes. The text has its origin in a magical manuscript written by one John Porter in 1583, which was itself probably drawn from earlier European sources. In the early nineteenth century the Porter manuscript came into the possession of the British occult fraternity, "the Mercurii," and a transcription of key sections was compiled by John Palmer. Palmer's transcription was in turn copied by the renowned occult scholar Frederick Hockley, and this transcription, along with another anonymous late nineteenth century manuscript copy, for the basis for the present work. Frederick Hockley (1809-1885), was an occultist and Freemason with an interest in Spiritualism who in later life was associated with the Societas Rosicruciana in Anglia. Hockley's peers considered him to be one of the great occult scholars of his time in fact he was held in such high regard by one of the founders of the Golden Dawn, W. Wynn Westcott, that he posthumously claimed Hockley as one of the Order's most outstanding Adepts. Colin D. Campbell, author of "The Magic Seal of Dr. John Dee" has edited and written an Introduction for the book , in which he examines the history of the manuscript, its place in Goetic literature, and its relevance to contemporary occultists. NEW book, fine condition. No dust jacket issued. Item #40739
ISBN: 9780933429253