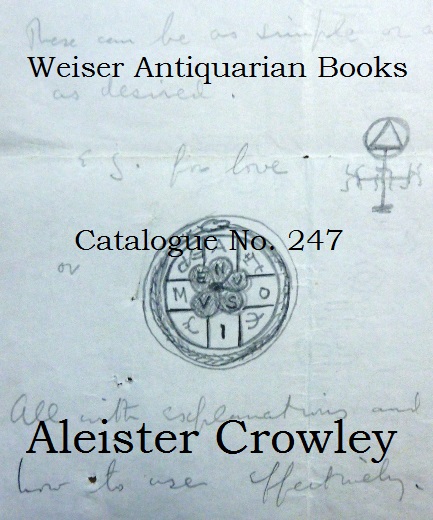 This catalogue is the fourth in a series of online catalogues presenting a selection of works from the Aleister Crowley collection of Clive Harper,
which is without doubt one of the finest in the world.

York Beach, Maine, USA: Teitan Press, 2012. First Edition. Hardcover. Small Quarto. xii + [84pp]. Bound in high quality black cloth, with a gilt design after Hockley stamped on the front cover, blind rules, and gilt title etc. on the spine. Black moire "coffin silk" endpapers, sewn. Colour frontis. Edition limited to 650 numbered copies. The full text of a previously-unpublished manuscript by Frederick Hockley (1809-1885), an occultist and Freemason, whose interests included scrying, ritual magic, alchemy and spiritualism. In later life Hockley joined the Societas Rosicruciana in Anglia and other esoteric fraternities, and his work was posthumously used by various members of the Hermetic Order of the Golden Dawn and his importance to nineteenth-century occultism is only now being recognised. The "Clavis Arcana Magica" is an unusual text for Hockley in that it is concerned with what might be considered "black magic." As Alan Thorogood describes in his Introduction, it gives instruction for the performance of a number of magical workings, the details of which were said to have been obtained for Hockley via his seer Emma, during a series of scrying operations undertaken between 1853 and 1856. The workings are preceded by instructions including the form of the "call to the crystal," the exorcism and the discharge. The first working outlines a method to call the spirits of five material substances or organisms for the purpose of receiving cognate visions, the second is a variety of praestigia for the revivification of animal as well as plant species, the third outlines the construction of a talisman which permits the operator to enter the “spirit state” while asleep, and the fourth is necromantic ritual "of marvellous power and force." This first edition comprises an Introduction by Alan Thorogood, followed by a typeset transcription of the text of the manuscript, with explanatory footnotes, etc., and a facsimile of the original Hockley manuscript. NEW book, fine condition. No dust jacket issued. Item #42293
ISBN: 9780933429291