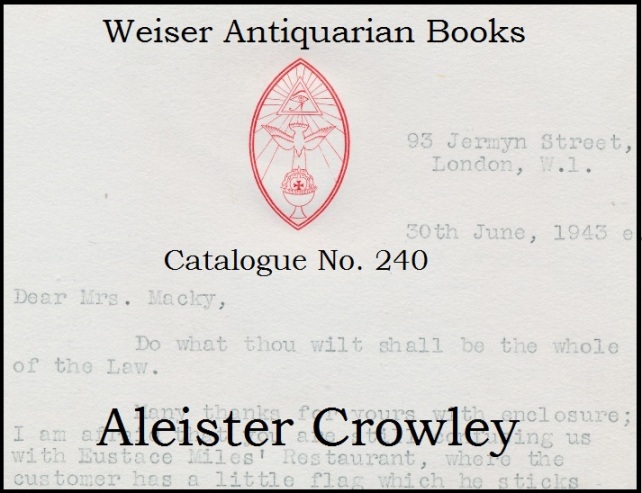 This is the second in a series of online catalogues presenting a selection of works from the Aleister Crowley collection of Clive Harper, which is without doubt one of the finest in the world (see further below).  Please note that not all the books in this list are from Clive's collection.  Those that are, will be identified as such by a specific reference in the individual listing. Gloucester, England: Rare Text Library / Helios, 1965. First Edition Thus. Hardcover. Quarto. 65pp. Original beige cloth with patterned papered boards, printed title label on upper board, gilt lettering to spine, colour plates. The fourth part in a series of nine comprising the magical components of Francis Barrett's "The Magus." Edition limited to 200 numbered copies, this being no. 93. The sixth volume of the Rare Text Library of Philosophical Research published by Helios Book Services of Gloucester, England, one of the pioneers of occult publishing in the UK in the 1960s. "The Magus" was first published in 1801 and is now recognised as one of the most influential works of the "Occult Revival" and probably the best-known magical text produced in nineteenth century Britain. At the time of the publication of this series "The Magus" was long out of print, with early editions difficult to find and selling for a premium. The idea behind the new edition was to make the most important sections of the text - each complete within itself - available in a durable form at an affordable price. It was a monumental task, with the text having to be completely retyped, and the tables redone - only the original diagrams were copies as facsimiles. This volume reprints the first half (complete in itself) of Part I of Book II of the original text which is devoted to Magnetism, comprising: Of the Magnetic or Sympathetic Unguent; the Power of Sympathy, Armary, Unguent; and curing of Wounds, Ecstasies, Witchcraft, Mummies, &c.; Of the Weapon Salve; Of the Imaginative Power, and the Magnetism of the Natural Spirits, Mummial Attraction, Sympathies of Astral Spirits, and their Bodies, upon which is founded the whole Art of Necromancy; Of Witchcraft in Particular; Of the Vital Spirit; Of the Magical Power, &c.; Of Exciting or Stirring up the Magical Virtue; Of the Magical Virtue of the Soul, and the Medium it Acts By. Very light bruising to corners and spine ends, endpapers unevenly browned, very slightly musty - else a tight, unmarked VG+ copy of a publication which inspired a new generation of magicians in the 1960s and 1970s. Item #64120

Ask a Question
See all items by Francis BARRETT